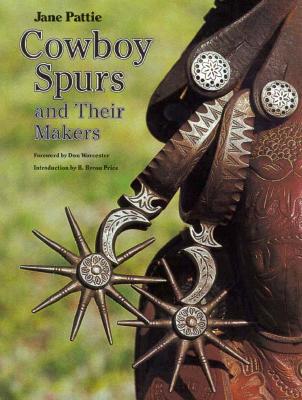 Cowboy spurs are a pure form of American folk art. Like the cowboy himself, the way spurs developed was molded by their use and the environment of the range, along with a generous dose of individualism and pride. "Cowboy Spurs and Their Makers" tells for the first time the fascinating story of this western art and the artisans who professional historians, and westerners and valuable reference for identifying spurs used by riders of Texas and the Southwest.
A visit with contemporary spur maker Jerry Lindley, with pictures of him at work, traces the process and mechanics of hand forging spurs and decorating them by the overlay method. Individual chapters are devoted to the most prominent makers of cowboy spurs--manufacturers Buermann and North & Judd, the spur and bit companies of Crockett, Shipley, and Kelly, and hometown blacksmiths such as Bianchi, Causey, and the Boone clan. In lively detail their histories unfold, along with helpful descriptions of their techniques and most representative spurs.
Eighty-five black-and-white photographs and twelve color plates lavishly illustrate the spurs and their makers. An appendix lists many other artisans, past and present, with the locations of their shops and the identifying characteristics of their products. This book will become a standard reference for students, historians, and general readers alike--for everyone who values the important contribution of the cowboy to our cultural heritage and of the blacksmith who shaped the cowboy's badge of honor, his spurs.