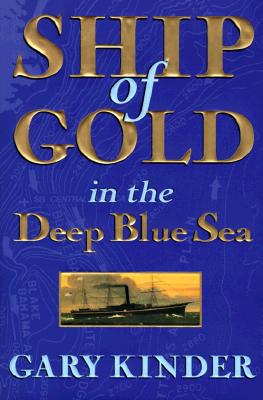 Bestselling author Gary Kinder tells, for the first time, an extraordinary tale of history, maritime drama, heroic rescue, scientific ingenuity, and individual courage. Ship of Gold in the Deep Blue Sea is the riveting true account of death, danger, and discovery on the high seas in the dramatic search for America's greatest lost treasure.

In September 1857, the side-wheel streamer S.S. Central America, carrying five hundred passengers and tons of gold from the mountains of California, sank in a hurricane off the Carolina coast. Lost in legend for more than a century, the tragic story resurfaced in 1989, when Tommy Thompson, a brilliant ocean engineer, sailed into Norfolk harbor with more than ten tons of pioneer gold. Using a combination of oceanography, computer science, and information theory to sift through historical records and penetrate the deep sea, Thompson's team had recovered the mint-state coins, antique bars, and sparkling gold dust from 8,000 feet below the surface of the sea -- proving wrong everyone who said it couldn't be done and establishing mankind's first real working presence on the deep ocean floor. It was, as Life magazine proclaimed, "the greatest treasure ever found", and its dollar value has currently been estimated in the hundreds of millions.

This AudioBook is a copiously historical record of the disaster, rendered in chilling detail with diaries from the survivors and eyewitness accounts, as well as newspaper reports from the worst peacetime at-sea disaster in American history. It is a chronicle of the technological breakthrough in which deep-sea robots were developed to perform complex work. And it is an incredibly exciting adventure story of how ateam of scientists and engineers, the Columbus-America Discovery Group, battled massive storms, technological challenges, and intrusive salvagers on the open seas to find the lost treasure. It is a fascinating story both of the power of the human will to succeed and of technological triumph.

Title: Ship of Gold in the Deep Blue Sea