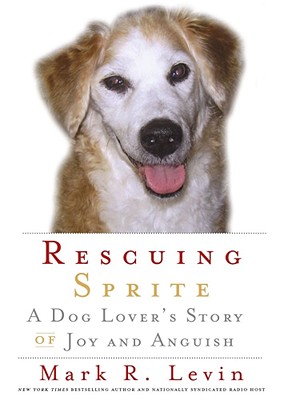 In Rescuing Sprite, Mark Levin tells of the joy and anguish of life with a rescue dog: the intimate and powerful story of his family and the dog they have for too short a time.

Although Mark Levin is known as a constitutional lawyer and a nationally syndicated broadcaster, he is, first and foremost, a dog lover. In 1998, he and his family welcomed a half-Border Collie/half-Cocker Spaniel they named Pepsi into their lives. Six years later, his wife and son persuaded him to adopt a dog from the local shelter, a Spaniel mix. It turned out he was older than originally thought, and he was the most beautiful dog they'd ever seen. They named him Sprite. Their lives would never be the same. Sprite and Pepsi became fast friends. They did everything together, from rummaging through the trash to loudly greeting the deliveryman. And the Levin family fell in love with him -- with his gentle nature, beautiful face and soft, huggable fur. But on Halloween night, shortly after joining their family, Sprite suddenly collapsed and was rushed to the animal hospital. It was the first of many such visits, and the start of a long journey for the Levin family, filled with much joy and anguish. During the next two years, Sprite and Pepsi were inseparable. And Sprite's bond with the Levin family deepened. Friends, neighbors, and even Mark's radio audience came to know and love Sprite. As Mark's daughter turned eighteen and graduated from high school and Mark's son turned fifteen, Sprite's health deteriorated -- even as his spirits remained high and his beauty and grace continued to inspire. Between Thanksgiving and Christmas 2006, the Levin family said their emotional final goodbye. Crushed and consumed with grief, Mark turned to family, friends, and fans for help. But new hope came when the Levins least expected it. Rescuing Sprite is a stunningly intimate look at the love between a family and a dog, one that movingly shows, in Mark Levin's words, that "in the end, we humans are the lucky ones." The author will donate a portion of his proceeds from the sale of this book to animal shelters.